This is what a 52-year-old man's lungs look like after 30 years of smoking!!

This is what a 52-year-old man's lungs look like after 30 years of smoking!!
Review By Chukwuma Chinaza Adaobi and Miracle Atianashie
In what has already been dubbed the "best anti-smoking advert ever," a Chinese transplant surgeon has shared a video of his team removing a blackened pair of lungs from a failed organ donor. Doctor Chen Jingyu, head surgeon of a transplant team, said the patient had died at just 52 years of age, after chain-smoking for 30 years. The man wanted his organs donated, but the team quickly discovered that the blackened lungs were not remotely suitable for transplantation and that the lungs would not be of any use to a patient in need on the waiting list. They had been heavily blackened due to decades of tobacco residue accumulation, and are far from the pink colour expected from healthy lungs. 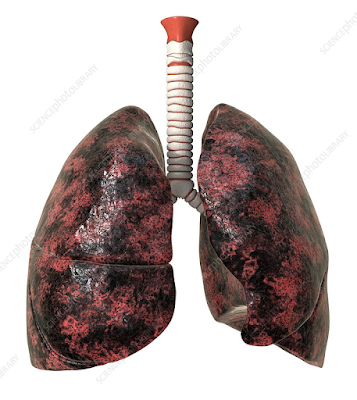 The former heavy smoker's lungs showed all the signs of calcification, bullous lung disease and pulmonary emphysema, all tied to three decades of smoking.

The patient didn't undergo a CT scan before his death. He was declared brain dead, and his lungs were swiftly harvested shortly after that, before anyone could examine them, which is why they made their way to Jingyu's team. Initial oxygenation index tests were OK, but when they recovered the organs, the surgeons realised they wouldn't be able to use them and had to reject them because of their shocking condition, as the video shows.
Dr Chen added: It would be impractical to say that we wouldn't accept the lungs of all smokers, but there are strict standards. These include lungs under 60 years of age in a patient who has only recently been declared medically dead; minor infections in the lungs and relatively clean chest X-rays are also acceptable. If the above conditions are met, we would consider transplanting the lungs.
at November 13, 2021 1 comment:

This is what a 52-year-old man's lungs look like after 30 years of smoking!!

This is what a 52-year-old man's lungs look like after 30 years of smoking!! Review By Chukwuma Chinaza Adaobi and Miracle Atianashie In...